The government today cleared National Telecom Policy 2012 that aims to abolish roaming charges thus allowing mobile phone subscribers to use same number across country without having to pay extra charges.

"Target is one nation full mobile number portability and work towards one nation free roaming," Telecom Minister Kapil Sibal told reporters after the Cabinet gave approval to NTP. The Department of Telecom (DoT) will now start process to implement full mobile number portability allowing users to retain their existing number at the time of changing their service providers across any state in the country.

However, consumers will have to wait for some time before roaming charges are abolished and one-number-one-nation concept implement as DoT will first work out modalities of the new scheme before it is brought into force. The NTP 2012 envisages increasing penetration of telecom services in rural area from current level of around 39 to 70 per cent by 2017 and 100 per cent by the year 2020.

Under the new policy broadband speed has been increased to minimum of 2 megabit per second (mbps). This change will come into force with immediate effect. With the new policy getting approved, telecom licences have been delinked from spectrum which was earlier bundled with the licences. The NTP 2012 will allow operators to provide services based on any technology by using airwaves and will not restrict them to use it for particular service using any specific frequency band. At present, there are frequencies which are specifically used for providing GSM or CDMA services as per the permit given to the companies.

NTP 2012 replaces 13-year-old New Telecom Policy 1999 and "seeks to provide a predictable and stable policy regime for a period of about 10 years," Sibal said. The cabinet has cleared the point that pertains to encouraging domestic manufacturing of telecom equipment.

"Making India a global hub for manufacturing. Till the time we will not set up industry here...India will not be able to become become global. It is very important because along with this prices of device will also come down," he said. The major details of the manufacturing telecom equipments are part of National Policy of Electronics which Sibal send is expected to be approved within a month.

"Electronics manufacturing policy is hopefully going to be decided this month.. it will go to cabinet soon," he said. The Cabinet has approved NTP 2012 with five changes related to revenue generation objective, Spectrum Act and TRAI Act. The government has deleted Spectrum Act which was proposed in the policy.

"Spectrum Act has been deleted as a policy matter we don't intend to have a spectrum act any more," Sibal said. In the point which aimed at giving more power to TRAI, Cabinet has added that policy making function would remain with government and the regulator will not make policy. "We just want to add that policy making function would, however, continue to remain with government, means TRAI will not make policy," Sibal said.

The cabinet also substituted the point which mentioned "direct revenue generation" as secondary objective of new policy with "availability of affordable and effective communication for the citizens is at the core of the vision and goal of NTP 2012" at two places. The government has also replaced a sentence related to spectrum allocation to migrate its users to different frequency bands to make way for services based on new technologies. Sibal said that any major changes in the policy in future will be brought to the cabinet for approval.


To sum it up, here are the main points : 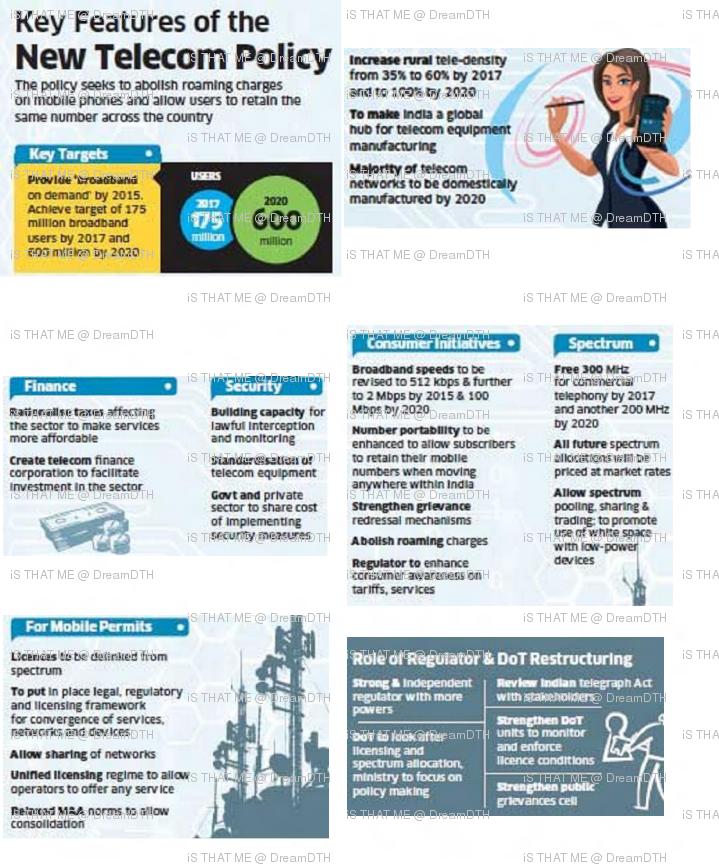 roaming charge Removed Soon........Very Good News, Now one Number use in All india also We port in Any number in any state,Any negative points For Subscribers in this Policy ?
S

Great Move , and good features
bb in 2mbps min is good
I

Vikram said:
roaming charge Removed Soon........Very Good News, Now one Number use in All india also We port in Any number in any state,Any negative points For Subscribers in this Policy ?
Click to expand...

NTP 2012 is going to be a boon for consumers, There are absolutely nothing in it thats against customers. All its about is better Services, Better Quality, Cheaper Costs...

Thanks to Mr.Kapil Sibal to replace the NTP1999 with NTP2012.
Although its very late, but better late than never...daer aaye durust aaye !

However, all of this seems to be a long term thing, might be a year or more till its implemented !

so from when its going to apply???
P

Wait for some more time
I

Thanks guys for the reps and replys

@ kuldeep : Cant figure out a deadline yet, but it will be implemented real soon
5 More Posts...

Setting floor for telecom tariffs may not be practical: TRAI