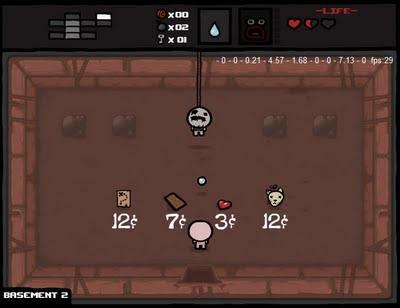 Just a few weeks after its official announcement, The Binding of Isaac has taken up residence on Steam. Despite the store page saying September, its creator Edmund McMillen (one half of the duo behind indie platformer Super Meat Boy) is confident the game will be on sale by the end of August.

McMillen describes The Binding of Isaac as “a roguelike shooter based on the dungeon structure of Zelda (NES).” Like Rogue and its many descendants, the game’s dungeons will be randomly generated, and players will rely heavily on items to upgrade and transform their hero. The controls will be reminiscent of old-school arcade shooters like Smash TV and Robotron, predecessors to the twin-stick shooter craze kicked off by Geometry Wars.

Though its gameplay differs greatly from the punishing platforming of Super Meat Boy, The Binding of Isaac’s aesthetic is quite similar. McMillen’s crude, bathroom humor-friendly art style remains, and Danny Baranowsky (composer of the excellent Super Meat Boy soundtrack) once again provides his musical talents.