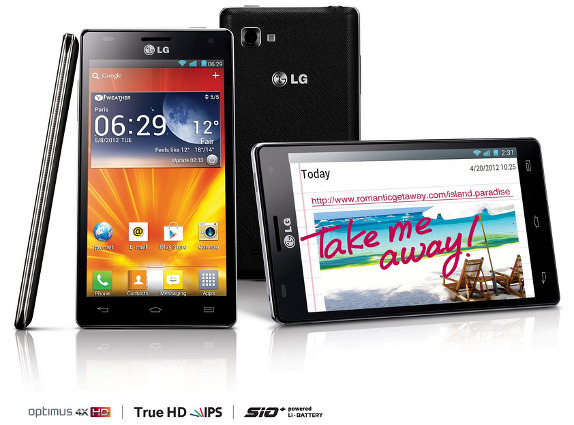 LG has launched the Optimus 4X HD, their first quad-core Tegra 3 handset in India. It was announced at MWC 2012 earlier this February. It has 4.7-inch (1280 x 720 pixels) True HD IPS display with 331 PPI and is powered by 1.5GHz Quad-core Tegra 3 processor. It runs on Android 4.0 (Ice Cream Sandwich) and has an 8MP auto focus camera with LED Flash support, 1.3MP secondary camera. It is just 8.9mm thick.

It has 16GB internal memory, 1GB LP DDR2 RAM and 3.5mm audio jack. It has Quick Memo app that enables users to jot notes on the screen using a finger that also lets users share it with social networks or via text messages and e-mails. It also features Media Plex that enhances image and video playback with features such as Fingertip Seek, Live Zooming and Time Catch Shot.

The connectivity features include, 3G, Wi-Fi with DLNA , Bluetooth, aGPS, HDMI via MHL and NFC. It has 2,150 mAh Lithium Ion battery.

The LG Optimus 4X HD is priced at an MOP of Rs. 34990. It would be available in various stores across India.
I