LG has launched a 84-inch ultra high resolution LED Smart TV with Cinema 3D. It has a resolution of 3,840 x 2,160 (UHDTV), which is four times that of Full HD, and will produce a full 1080p picture for 3D movies with LG's FPR Cinema 3D passive glasses technology. 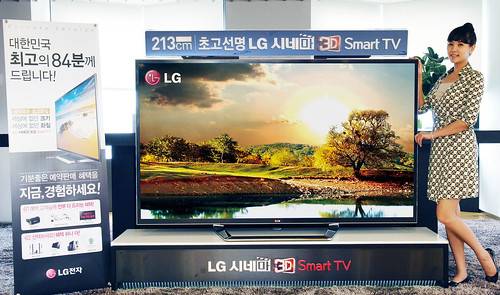 Check the source if you need more info as I cant get more. But its in Korean. :rofl:rofl:rofl

LG Electronics, the world's largest size from 20 to 84 inch (213cm) UD (Ultra Definition) support LED TV (Model: 84LM9600) and 84 in the domestic market is limited to the surprise book sales.

The ultra-high resolution 84LM9600 model (UD) for the first time as a TV that supports two meters diagonal (213cm), charge the mattress height (2 meters) longer than the. LG Electronics, through which the super-premium TV market leadership is definitely a strategy brings. Selling price (KRW) 2500.

As high-output engine, the more you need a large car, a large TV in the high-resolution techniques should be applied to real grandeur, realism can be felt. LG Electronics in the future Cinema 3D Smart TV plans to offer a variety of content, UD resolution.

In addition, Platinum (Platinum, platinum) in the material sense Monochrome (Monochrome, Monochrome), design implementation, and added luxury. In addition, eye glasses are comfortable and lightweight LG Cinema 3D technology is adopted only by very large screen, realistic and immersive three-dimensional you can feel.

▶ 20 from 84 one month to qualify book sales, started shipping in late August

Book sales from 20 to 20 next month, one month, LG Electronics dealers nationwide and only carried out in 84, and begins shipping in late August. Manager who sold you the product for shipment to accompany premium installation teams operating, installation plans to maximize customer satisfaction.

LG Electronics, the maximum size of the customer experience of the highest quality and purchase directly to schedule next week at COEX (COEX) in the LG Cinema 3D experience, as well as John Lotte / New World / Hyundai Department Store, etc. Each one leaves every department store where a total of nine Ten 84LM9600 model is planning to exhibit.

LG Electronics of Korea after the second half of this year in North America, Europe, Asia, Latin America in global markets, including UD product releases, full-fledged super-, ultra-high-resolution TV market, plans to open.

Market research firm DisplaySearch, the worldwide TV market this year, UD resolution 2900 daeeseo 2016 exceeded 4 million, was expected to grow by 1,386 times. Also, this summer the British BBC and NHK Japan Broadcasting UDTV pilot, broadcast in the second half of the experimental plan KBS is being said.