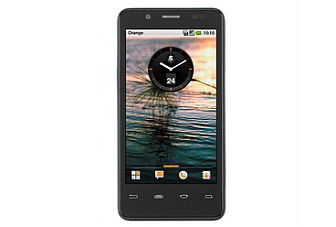 Intel on Monday announced plans to expand its smartphone lineup via several partnerships with global carriers and handset makers.

The chipmaker also unveiled two new Atom processors, the first of which doubles the performance of the "Medfield" chip and another aimed at budget devices.

Intel will team up with carrier Orange*, handset makers Lava International and ZTE, and Visa for Intel-based mobile devices and solutions.

The Orange* device, made by Taiwanese company Gigabyte, was previously announced and PCMag mobile analyst Sascha Segan got some hands-on time with the device here at Mobile World Congress.

But Intel has also teamed up with Lava International for the XOLO Smartphone by Lava. It will be available in India, the first Intel-smartphone to be released in the region. The XOLO is based on the Intel Atom processor Z2460, formerly known as Medfield, includes hyper-threading technology, and supports HSPA+ with the Intel XXM 6260 platform.

The XOLO will be available in the second quarter and be supported by major Indian carriers, Intel said.

Finally, Visa has certified devices based on the Intel Z2460 for use with Visa payWave.Meanwhile, Intel has signed a multi-year agreement with ZTE. The first Intel-based ZTE device will hit the market in the second half of 2012.

At January's Consumer Electronics Show (CES), Intel said Lenovo and Motorola had committed to using its Atom processors in smartphones.

System-on-a-Chip (SoC) Expansion
What type of chips will we see in these and other devices in years to come? Intel said today that the Atom Z2460 now supports speeds up to 2GHz.

The company also unveiled the Atom Z2580 processor, which Intel said doubles the performance of the Z2460. Intel will sample the Z2580 in the second half of the year with customer products scheduled in the first half of 2013.

The new Intel Atom processor Z2000, meanwhile, is geared toward the "value" smartphone market. The platform includes a 1-GHz Atom CPU, and support for the Intel XMM 6265 3G HSPA+ modem with Dual-SIM 2G/3G.