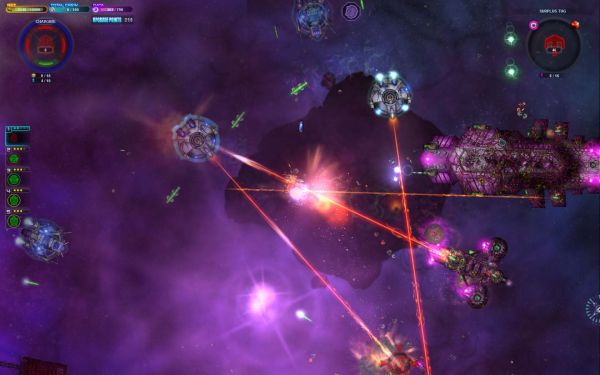 Top-down shooting, upgradeable fleets, a galaxy-wide zombie infestation: MinMax Games’ Space Pirates and Zombies (officially abbreviated S.P.A.Z.) has it all for just $15. Released yesterday on Steam, S.P.A.Z. is also available through a number of other digital distributors.

In the world of S.P.A.Z., warring factions of miners and military tussle over resources in the lawless expanses of space. Your small but merry crew, on a mission to find the mother lode, stumbles across a ship crawling with zombies. As you can imagine, things get complicated from there.

S.P.A.Z. is quite the feat for a development team of two. It blends top-down shooting with in-depth fleet construction (similar to Gratuitous Space Battles or Galactic Civilization) and RPG-like skill progression. The flight mechanics are physics-based, lending the keyboard and mouse controls their own floaty flavor of twin-stick shooting. As your fleet grows, you can issue commands at the macro level if you prefer, but it’s the riveting small-scale dogfights that will tell you if have the nerves and skill to stick it out in S.P.A.Z.

The $15 price tag may seem a bit steep, so I encourage you to give the demo a spin (I spent 90 minutes with it and am already hooked). Sure, the character art doesn’t measure up to the ship designs and the writing doesn’t always land. But its old-school space combat and persistent, procedurally-generated universe make the idea of sinking hours into S.P.A.Z. incredibly appealing.