In order to promote digital transactions, an upgraded Unified Payments Interface for banks is in the offing that will provide a cost effective and secured option, a senior finance ministry official has said.

A single UPI platform is being developed for all banks as against the existing system of individual platform, the official said.

Currently, about 30 banks including SBI, PNB and Canara Bank have their individual platforms. The new platform would be easy to use and data secured, the official said.

With this new payment method, mobile phones will be used as virtual debit cards and a customer will be able to send or receive money instantly along with other features, the official said.

Given the high mobile phone penetration in the country and government's big push to digital banking, UPI is going to pick up traction, the official said, adding that it has a potential to provide mobile wallet players a tough competition.

Post demonetisation of high value currency notes last month, it has been noticed that more and more people have started using e-payment means including digital wallets for making payments for various transactions.

There are about 40 crore smartphones while e-wallets have risen to 23 crore in less than one and half years.

UPI is an indigenously developed platform by National Payments Corporation of India (NPCI) and set up with the support of the Reserve Bank and Indian Banks Association (IBA).

NCPI operates the RuPay payments infrastructure that, like Visa and MasterCard, allows different banks to interconnect and transfer funds domestically at the moment.

"Unlike the standard payment infrastructure, which, by and large, facilitates only the 'pushing' of transactions, UPI, with both 'push (pay)' and 'pull (collect)' facilities, is a game-changer," Anshuman Verma, founder and managing partner of M1L said.

Not only could UPI-based technology solutions help merchants reduce set-up costs at their ends, they would potentially lead to greater reduction in transaction costs for consumers, he said.

"UPI is an open and interoperable technology stack that works by allocating a unique identification or address (not bank account/card details) for each user, resulting in more secure transactions.

"The decoupling of account details with transaction process could lead to injection of more trust in digital transactions, lending higher credence to Indian digital world, in general," Verma said.

He said however that more discussions are needed about sound understanding of this unique 'techno-socioeconomic-behavioural triode'.

"Clarity on this triode will play more than crucial role in arriving at the best end-point-usage of UPI's India stack," he added.

I have PhonePe UPI app. They show transaction history. You can see current balance of your attached account also.

UPI on Twitter: "We would like to welcome Jammu & Kashmir Bank on UPI. Know more:Know more: [url=https://t.co/xHjXw3BZHU]http://bit.ly/2p3oBYy #UPIseJudein @Jkbank1 ...[/url] 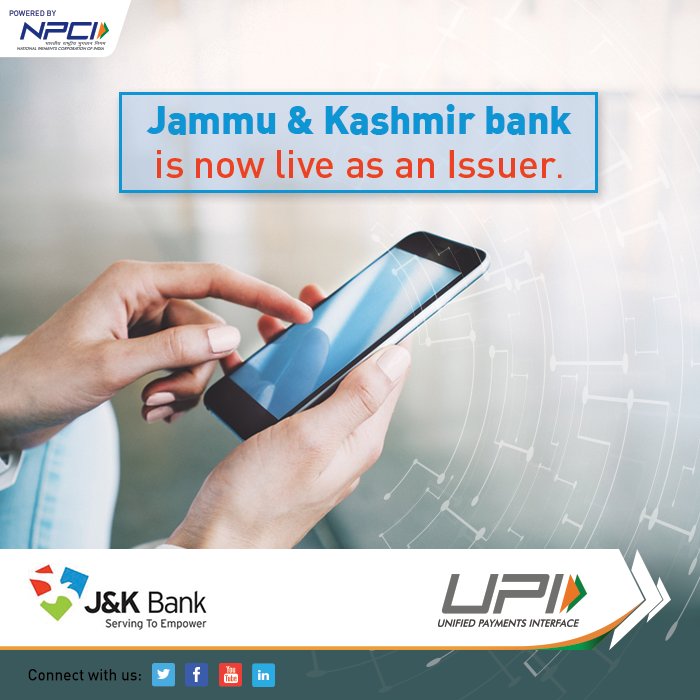 Whole SBI group is on UPI now. (All changed to SBI)