Independent security organization NSS Labs released a report today claiming that Internet Explorer 9, the latest version of Microsoft's web browser, detected 99.2% of all socially engineered malware in its tests, compared to 13.2% for Chrome 12, 7.6% for Firefox 4, 7.6% for Safari 5, and 6.1% for Opera 11 (the most recent versions of the competing web browsers available at the time of testing). NSS Labs defines socially engineered malware as "a web page link ... designed to fool the user into taking action." 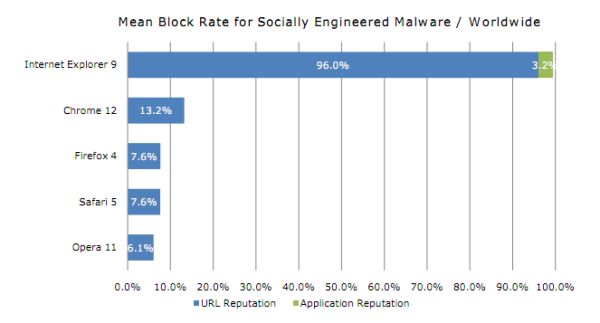 The full report, which includes in-depth methodology for the test and can be found here in PDF format, credits IE9's SmartScreen filter for its high score - SmartScreen can warn users against visiting both known-bad URLs and downloading executables with suspicious attributes

Of course, socially engineered malware is just one of many types of malware, and IE's detection alone isn't enough to stop users from downloading and running the malicious software anyway. There is no foolproof way to keep any computing device completely safe from malware, but in Windows particularly you'd still be well-advised to use antivirus protection and, whenever possible, run as a standard user instead of a computer administrator.

[Thanks to AT commenter Braumin for the tip!]