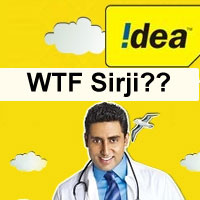 NEW DELHI: Telecom service provider Idea Cellular, whose nine licences stand cancelled following an apex court verdict earlier this month, Tuesday said it has filed an application with the registrar claiming it had sought the licences much before 2008.

"Arising from the Supreme Court Order of Feb 2, 2012, Idea Cellular has today (Tuesday) filed a 'clarificatory application' with the registrar, restricted only to the UASL ((Unified Access Service License) applications made by Idea in June 2006," the company said in a statement.

Idea also said that the firm's license applications were covered by clause 23 of the UASL guidelines dated Dec 14, 2005, to be made on a continuous basis, and were required to be processed within 30 days of their application.

"Factually, within the 30 day period, there was no other applicant. Idea's license applications were unjustly delayed until 2008, otherwise they fall in the same category as other 2004 and 2006 UASL applications mentioned in the judgment, but which do not form part of the cancelled licenses."

"The clarificatory application has been filed, seeking further direction from the Supreme Court."

Idea Cellular has over 106 million subscribers across the country.