Google set to roll out its music service this week

If reports are to be believed, Google will launch its music service at its event called 'These Go to Eleven' scheduled to be held in Los Angeles later this week. The Google Music store is reported to have new features such as a MP3 music store with a direct connection to its social network Google+. It will also feature licensed tracks from major music labels.
Google had launched its Google Music Beta in May earlier this year. Similar to Amazon's Cloud Player, Google Music allows users to upload their music and store it online. The music can also be streamed to the user's PC or Android devices. Google's Music service also comes with an offline functionality, by making recently played tracks available offline. Google also offers some free licensed tracks to users, and offers a weekly newsletter with downloads of new tracks that can be added to the store.
According to The Verge, Google has started sending out invitations for its forthcoming event, where the search engine company will unveil its music store. The Verge report states:
“We just got word from that Google is holding an event on November 16th, and our sources tell us it's going to be for Google Music. The email came from Spinal Tap's Nigel Tufnel, in case the event's 'These Go to Eleven' name wasn't obvious. No word yet on what will be announced, but we expect to see music purchasing added to the service as well as new Google+ sharing service following a glimpse in October of an HTML5-powered music player. We'll be covering the event live at 2pm PST.” 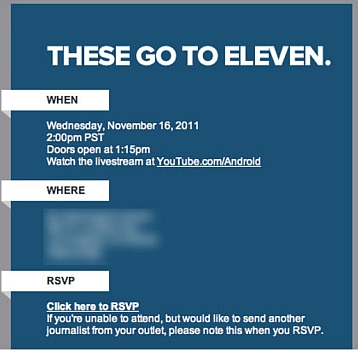 Reports of the launch of the Google Music store come in the backdrop of ongoing debate over Google's free MP3 Music Download Pro app on the Android Market, which allow users to search and download copyrighted music to their smartphones. In spite of criticism, Google has said it will not remove the app from its apps store.