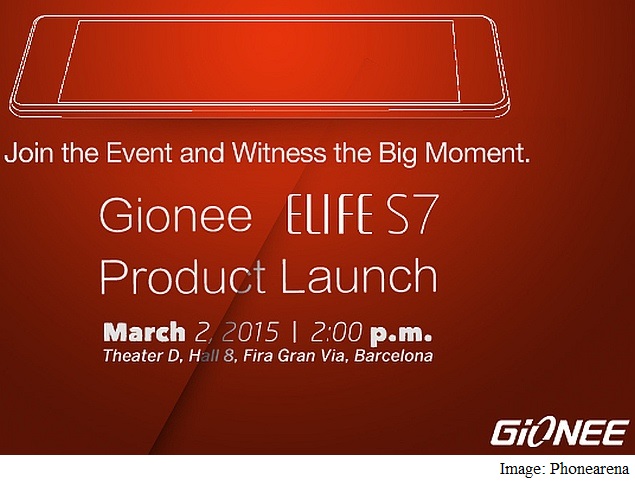 Gionee, the Chinese smartphone maker
which earned a Guinness World Record
for creating the slimmest smartphone
with the Elife S5.1, will be unveiling its
Gionee Elife S7 smartphone at the
upcoming MWC 2015 trade show. The
firm has started sending invites for the
event, which is scheduled for March 2 at
Barcelona.

Though there is no information on the
specifications of the handset as of now,
it might not feature in the 'slimmest
smartphone' race if a comment by the
company's Head of Global Marketing,
Oliver Sha, is any indication.

"The race to make the slimmest
smartphone was getting out of hand.
Going so slim is actually not benefiting
user experience without the performance
to back it up," stated Sha, indicating tha
the smartphone might be slim for sure
but not the slimmest.

The name of the smartphone, Gionee
Elife S7, also adds to the speculation
that it might be around 7mm thick,
considering the fact that Gionee Elife
S5.5 was 5.5mm thick and Elife S5.1
was 5.15mm thick. It is worth noting th
after the Elife S5.1 , Oppo took the
'slimmest smartphone' tag by introducin
its Oppo R5 (4.85mm), and is now at
second position after Coolpad lvvi K1
Mini, which is 4.7mm thick.

If the Elife S7 is out of the slimmest
smartphone race, we can at least expect
the smartphone to use the extra space b
ensuring better performance, such as
better battery life, less heating issues, th
inclusion of a headphone jack and more.
Recently, Gionee said it is ready to start
manufacturing in India, but is awaiting
policy clarity from the Indian governmen