Facebook says no accounts were hacked during spam attack

Facebook has rejected reports of hacking of its users' accounts in India. It also denied claims that the profile pictures of its users were transferred to any unwanted site.
“There have been inaccurate reports of Facebook users' accounts being hacked. This is not true. Users photos are not being transferred to an unwanted site and no accounts have been compromised,” says Facebook. “Protecting the people who use Facebook from spam and malicious content is a top priority for us. We are always working to improve our systems to isolate and remove material that violates our terms, and take action on those who is responsible for these types of content.”
Earlier, reports stated that some two lakh Facebook accounts in India had been hacked. It's notable that Facebook had acknowledged being under a massive spam attack. The social networking site later claimed that it had identified the problem and was working on its rectification. According to Facebook, the recent wave of p**nographic image spam was caused by users of a browser with a security flaw and that there was no problem with the website. 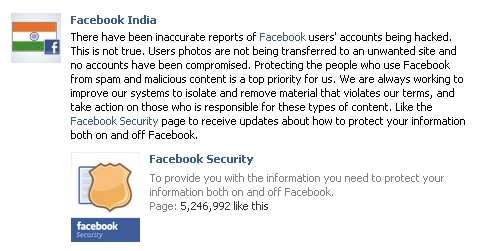 Explaining the cause of spam, a Facebook spokesperson revealed that users were tricked into pasting and running malicious javascript in their browser URL, which ultimately led to sharing of the offensive content. However, the spokesperson pointed out that no user data or accounts were hacked during the spam attack.
“We've built enforcement mechanisms to quickly shut down the malicious pages and accounts that attempt to exploit it,” Facebook’s spokesman said.
“We also been put those impacted through educational checkpoints so they know how to protect themselves. We've put in place backend measures to reduce the rate of these attacks and will continue to iterate on our defences to find new ways to protect people.”