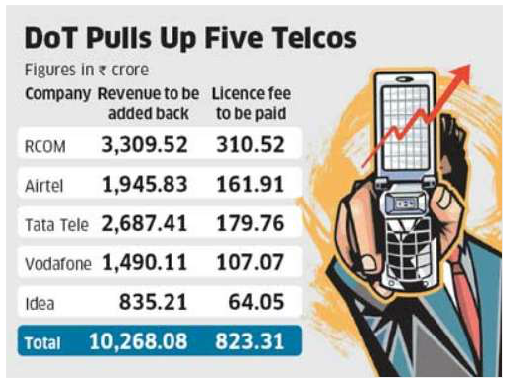 In a presentation to Sibal, the DoT said that five operators - Bharti Airtel, Vodafone, Reliance Communications, Tata Teleservices and Idea Cellular - had understated revenues by Rs 10,268 crore during this two-year period. ET reviewed a copy of this presentation.

Since telecom companies pay 6-10% of their annual revenue as licence fee and 2-6% as spectrum usage charges, reporting lower revenue brings down the component they have to share with the government.

According to the department's estimates, Reliance Communications faced the maximum payout at Rs 310.52 crore, followed by Tata Teleservices, which has to pay Rs 179.76 crore. While Bharti Airtel will have to Rs 161.91 crore, Vodafone and Idea will be set back by Rs 107.07 and Rs 64.05 crore, respectively.

This is considerably lower than the DoT's estimates last year, when it planned to impose penalties totaling Rs 1,594 crore on these five mobile phone companies.

In 2009, the government had ordered external audits on the books of all leading private cellphone companies to make sure that they had correctly reported and shared revenues with it. Jaipur-based Parakh & Co audited RCOM's books and was the first to submit its report. Contractor, Nayak & Kishnadwala were the auditors for Bharti Airtel, Chhajed & Doshi for Idea Cellular and SK Mehta and Company looked at the books of Vodafone.

The law ministry has already approved the telecom department's plans to issue showcause notices to telcos on this issue.

According to the DoT, the special audit had revealed that telcos had failed to include income from investments and had cited a judgement from the telecom tribunal to support their stance. The department has pointed out that licence agreements clearly stipulated that revenue share applied to profit from sale of investments, while adding that the Supreme Court had set aside the TDSAT judgement on this issue in October 2011.

The department's presentation also adds that telcos had failed to include income from sale of assets such as towers, networks and switches and handsets. It has further reasoned that gains from foreign exchange variations, miscellaneous income as well as that from extraordinary income must be added to total revenues of mobile phone companies, and licence fee and spectrum usage levies be paid on the same.

Importantly, the DoT has also said that these five mobile companies combined had to add Rs 538 crore as income from infrastructure sharing, Rs 1,701 crore from expenses towards margins and commissions given to distributors and agents and Rs 585.82 crore roaming income to their overall sales. It has dismissed telcos' argument that discounts given to distributors and vendors cannot be treated as revenues on the grounds that the telecom tribunal had said that licence fee is payable only on realised revenue. The DoT presentation adds that the Supreme Court had set aside the TDSAT judgement on each of these issues.
Click to expand...