The "Kabali sentiment" is at its peak now that the release date is nearby and corporate companies are going all out to join the frenzy.
Catering to the God-like stature given to superstar Rajinikanth, Fyndus, a data processing company in Chennai, has declared a holiday on July 22, 2016, the day the movie is being released.
After receiving many leave applications, a notice signed by the company's vice president was sent out. "On account of the release of superstar RAJINI's movie "KABALI" we have decided to declare holiday on July 22, 2016 in efforts to avoid piled up leave requests to the HR department. We also take the privilege of going the extra mile to support anti-piracy by providing free tickets for the former to Fyndus employees", read the notice.

And Fyndus is not alone in this craze for Thalaivar's next release, many employers are booking entire cinema halls for their employees.
Also read: Kabali: Rajinikanth-mania reaches the sky. Literally!
TheSocialPeople, a digital media marketing startup, has planned a Rajinikanth costume day on July 21, the ET reported. The 35-member team will come dressed up as a character from one the superstar's films and get an off the next day.
Startups down south are also using the "Kabali sentiment" to run promos and campaigns. GoBumpr, a vehicle service startup, is running a social media campaign to spread the message that if good care is taken of the vehicle then it like the superstar who maintains his charisma even at the age of 65.

movie not released yet
V

Great .. Then declare the National Holiday :wall .. Dont Know where is Country going :s:dodgy ..
A 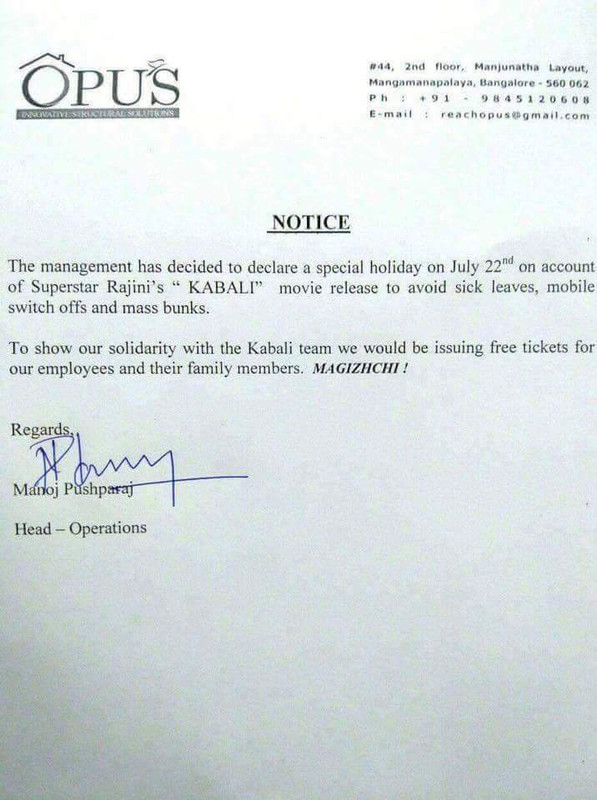 how to capture screen
S

In Bangalore no holiday for kabali movie, only corporate companies gave permission to Rajini fans...
A

Dont worry they will compensate on another day
G

amarnathkvk said:
Dont worry they will compensate on another day
Click to expand...

My concern not about that amar .. Yeah i know they should compensate the OFF .. But our country losing profit on that day during this OFF like " Bandh "