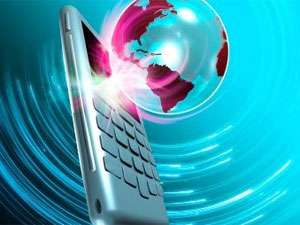 Telecom regulator TRAI may set a base price of Rs 10,972 crore, or over $2 billion, for 6.2 MHz of start-up spectrum, when airwaves freed up by the Supreme Court's decision to invalidate 122 licences are auctioned.

This is because TRAI may be bound by recommendations it had made in November 2011 suggesting that a pan-India 2G licence, or 6.2 MHz, should be valued at a minimum of Rs 10,972 crore, a six-fold increase from the 2001 price of Rs 1,658 crore, a senior official close to the decision-making process said. This values one unit or MHz of airwaves at Rs 1,770 crore.

TRAI's calculations have been endorsed by the Telecom Commission, the apex policy-making body of the telecom department, making a lower base price difficult to justify. "Within a space of a few months, the value of 2G spectrum cannot change.

TRAI's recommendation of the value of the licence is in public domain. The telecom department recently approved it," the official quoted above said. The cancellation of 122 mobile permits by the apex court has freed up 540 MHz of 2G spectrum across the country. 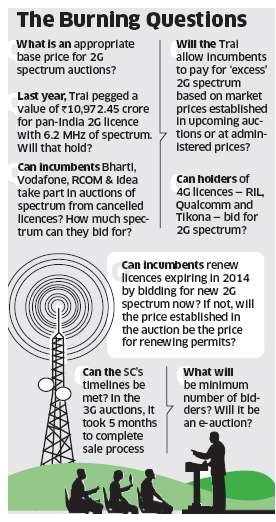 The court has ordered the government to auction the airwaves after seeking recommendations from TRAI. The sector regulator on Friday issued a pre-consultation paper asking telcos to respond by February 15, after which a formal consultation process will begin.

TRAI Chairman JS Sarma told ET that no decision had been taken and that the regulator would first launch a pre-consultation paper, followed by a detailed consultation process.

"At this stage, we have no comments - it is incorrect to comment on the final outcome," he said.

TRAI first arrived at the Rs 10,972-crore valuation in February 2011 after the telecom department asked it to fix the value of spectrum for the future.

At the time, it had added a caveat that this valuation could not be applied to existing players.

The Telecom Commission had endorsed these recommendations last month. The 3G auctions in 2010 had valued a single unit of airwaves for these high-end services at Rs 3,350.2 crore.

Incumbent operators such as Bharti or Vodafone, which are expected to benefit from the impending disappearance of new operators such as Uninor and Sistema whose licences have been scrapped, may have to pay a higher price in these auctions.

That is because TRAI, in its November 11 communication to the DoT, had reiterated that 'excess' 2G spectrum held by incumbents beyond the contracted limit of 6.2 MHz should be valued at Rs 4,572 core for every MHz on a pan-India basis.

The Telecom Commission had decided that incumbent GSM operators must pay either the 3G-auction price, or the TRAI-administrated price, whichever is higher for the particular region, for all airwaves they hold beyond 6.2 MHz. The commission had approved this during a recent meeting. It has also prepared a Cabinet note, reviewed by ET, outlining these valuations for 2G spectrum.

An executive with one of the telcos whose permits were cancelled said the government must now undertake confidence-building measures, including a low base price for the upcoming 2G auctions. This executive further added that there would be no takers for 2G spectrum at TRAI's valuations.

Executives with other companies whose licences were annulled told ET that it would be 'impossible' to continue unless the re-entry costs remained low. They said they would comment on the base price only after TRAI had decided on it.

"Both TRAI and the government may have a lot of explaining to do if they go with any other base price," explained BK Syngal, senior principal, Dua Consulting, and former chairman of VSNL.

"TRAI had arrived at this figure on the basis of the 3G-auction price, the growth prospects and other factors - this was through extrapolation. The way out is to point that the situation on the ground has changed. The reality is that the price of 2G spectrum has never been tested in the free market since 2001."

According to Jaideep Ghosh, partner, KPMG, re-auctions cannot change the valuations of the airwaves significantly. "The total amount of spectrum remains the same - the only thing is airwaves held by operating companies are now coming into auctions.

To attract bids from some of the serious players whose licences were cancelled, or even from a new player, the base price has to be reasonable. But a different valuation for this spectrum as against TRAI's earlier figure may lead to more PILs being filed in the courts," he said.

Ghosh also said the whole process was so complicated that it may not be possible to fix base price and guidelines for the new auctions within the time-frame of four months stipulated by the court.

Any move to have a lower base price for the upcoming 2G auctions will see incumbents such as Bharti Airtel, Vodafone Essar and Idea Cellular demanding that this benefit be extended to them also.

Top executives of these companies, including Bharti Airtel Chairman Sunil Mittal and Vodafone Group CEO Vittoria Collao had met both Telecom Minister as well as Prime Minister recently, and said the 'industry was united on the issue that 2G auctions be the preferred method for determining the market value of spectrum given the ambiguity involved in alternate methodologies'.

Put simply, these operators are suddenly in love with auctions as they share the view that auction price will be only a fraction of the Rs 4,572 crore proposed by TRAI for every unit of 2G airwaves they hold beyond the contracted limit of 6.2 MHz limit.
Click to expand...

Article Jio adds subscribers at the cost of Vodafone Idea and Airtel in May 2020: TRAI Report