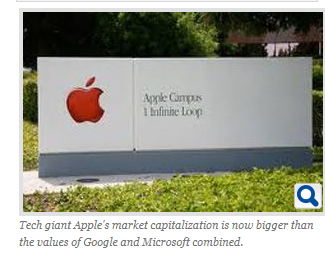 The iPhone maker's market cap is around 462 billion dollars as of mid-Friday.

According to the paper, tech bloggers have been coming up with all kinds of statistics to put Apple's market cap in context.

Fortune's Philip Elmer-Dewitt pointed out that Apple's now worth more than the gross domestic product of Sweden, which is 458 billion dollars.

According to earlier reports, Apple's revenue figures revealed that its iPhone business alone has become bigger than the whole of Microsoft.

Facebook, Google Could Lose Over 4400 Crores in Ad Revenue in 2020 Because of Coronavirus