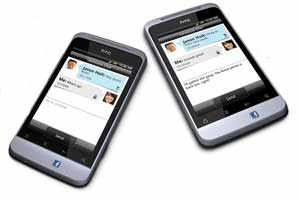 HTC has now launched one of its Facebook phones in the Indian market. This is the full touchscreen HTC Salsa which is available for purchase in India via Flipkart. Priced it 20,499 there has been no official announcement from HTC, we believe that the Taiwanese manufacturer may soon make it official.

The HTC Salsa is packed with standard hardware and, it sports a dedicated Facebook button for easy access to the social networking site. It includes a 5 megapixel camera, and a secondary front facing VGA camera for video calling. The device runs Android 2.3 Gingerbread, sports a 3.4-inch display, 512MB of RAM and Internal memory, and an 800MHz Qualcomm CPU.
K

This is very good smartphone and low price
J

its much better than chacha lookswise (as this one has got pretty enlarged screen as compared to chacha which seems to be like a calculator to me .. actually chacha has got a look that of blackberry bold) and salsa is sumwat like ipad.

Recent two htc phones ie htc salsa and htc chacha when i heard bout these two phones the, first thing on my mind was like htc salsa as the name suggests to be like music phone but chacha :hysterical: didn't make any sense..lol. It made me feel as if the phone was gonna be utilized by the noobs..lol really...