The much awaited world’s cheapest $35 android Tablet is finally launched in India dubbed as Aakash developed by the Indian Institute of Technology (IIT Rajasthan).

Kapil Sibal, Union Minister for Human Resourced Development launched Aakash Tablet and it will be sold to students at the subsidized price of $35 (approx Rs. 1720) to expand digital access across India.

Speaking on the launch of Tab, Minister Kapil Sible announced that the “Aaksh Tablet” will initially be available in a pilot run of 1,00,000 units before being rolled out to millions of secondary students over the next few months. The tablets will be distributed state-wise and each state will get 3000 units in first phase. This device was also distributed among 500 children on the occasion.

Powered by Android 2.2 (Froyo) the 7-inch tablet has a resistive multi touch screen and Conexant CPU with HD Video and accelerated graphics.

Manufactured by London (UK) based DataWind, branded as UBSLATE and renamed as the Aakash tablet weighs 350 grams and has 256 MB of RAM and 32 GB expandable memory slot and two USB ports. The tablet also has support for Wi-Fi IEEE 802.11 b/g connectivity and includes a microphone and stereo earphones. It comes with one year replacement warranty. 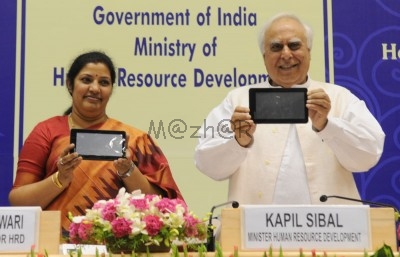 According to DataWind, The Premium version of Aakash Tablet inbuilt cellular modem (GSM/3G) and SIM card slot to access Internet, which will be absent in the $35 (Rs.1720) device, supplied to the Government of India will be available at retail stores across India at MRP of Rs. 2999 by the end of October 2011.

A keyboard portfolio case for the Aakash Tablet will also be made available during the premium version launch at an additional cost of Rs. 300. 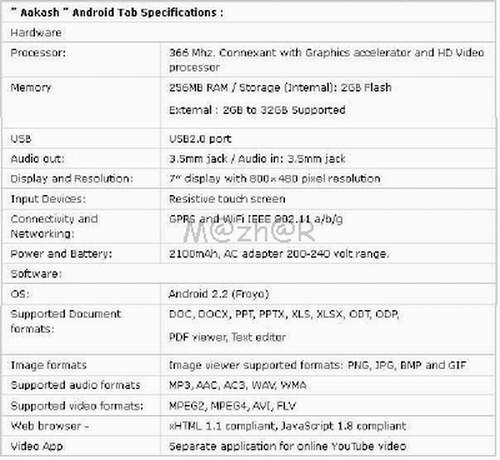