So with all the problems surrounding the 2022 FIFA World Cup in Qatar when do you think it will be a right time for India to host the FIFA World Cup?

Some of the problems faced in Qatar will be faced in India also like sale of beer publicly. Females wearing provocative dresses already we have seen moral policing happen in various parts of the country. Also there are cases where people say these dresses are at fault especially when it comes to female harassment (voicing out general opinion not mine).

Also another big issue will be corrution, India being the largest democracy and soon to be the most populous is also the most corrupt and to host a WC we need to have the sort of infrastructure we have to build everything from scratch currently we dont have big stadiums that are of WC standards barring 2 or 3. So in the process of developing the stadiums and the transport facilities we can expect a lot of money being siphoned off. Keeping all these things in mind when do you think India can realistically hold a FIFA WC.

We all know the corruption that happened during 2010 Commonwealth games in New Delhi under Suresh Kalmadi. So please consider the logistics involved and the infrastructure required before saying when India can host the WC.

Never. Don't need unwanted debt from stupid novelty projects. Same funds can be used across all states and Union Territories instead of 6-7 cities.

Also these events like FIFA World Cup has lost it's prestige by awarding rights to thugs like Russians and slavery supporting backward countries like Qatar. Based on the trend North Korea or Iran feels like an ideal partner for FIFA.
B

These sort of events actually help is the development of cities. I think like 2046 will be a good time to host the WC. It is faraway we can slowly develop the infrastructure and also the national team too. Anyway India is planning a Olympics bid in Ahmedabad for 2036 which is good.

federer.reddevil said:
That is true but atleast it is in the pipeline and who knows like maybe 2022 WC was awarded to Qatar 2036 Olympics might be awarded to Ahmedabad
Click to expand...

federer.reddevil said:
That is true but atleast it is in the pipeline and who knows like maybe 2022 WC was awarded to Qatar 2036 Olympics might be awarded to Ahmedabad
Click to expand... 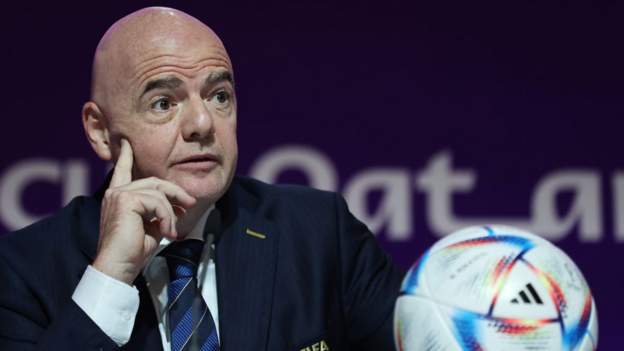 Fifa president Gianni Infantino accuses the West of "hypocrisy" in its reporting about Qatar's human rights record on the eve of the World Cup.

Fifa president Gianni Infantino accuses the West of "hypocrisy" in its reporting about Qatar's human rights record on the eve of the World Cup.

Nothing can be done about these people if FIFA elected good people then this problem wouldnt have happened
1 More Post...

Inox to screen World Cup matches at it's multiplexes