Seventeen migrant labourers died in an accident in Aurangabad, Maharashtra. A goods train passed over these workers sleeping near the track on the Aurangabad Jalna railway line, CNN-News18 has reported. As per PTI, however, the number is 14.

All 17 migrant labourers sleeping on the tracks near the flyover died on the spot.

The workers, who were walking to Bhusawal from Jalna, were returning to Madhya Pradesh, an official at the Karmad police station told PTI. They had been walking along the rail tracks and slept on the rail tracks due to exhaustion, he said. They were mowed down by the train at 5.15 am, the official added.

2020 worst year.. we have to soon forget this year..
Corona, gas Leakage , Train accident
too much..
near is end I think.

To be fair all are related to Coronavirus. Migrants are visiting because they have no jobs or access to income because of lockdown cause by Coronavirus. Also the chemical gas plant workers were overwhelmed because of employee limit restrictions due to lockdown. This coronavirus has to be the worst thing that has ever happened to mankind since nuclear weapons.
D

Usually homeless people sleep at station. Since the station were closed. They preferred tracks. Coming to the topic. These migrants were walking home via railway tracks to their home state of Madhya Pradesh.

not only in India, 2020 affecting worldwide 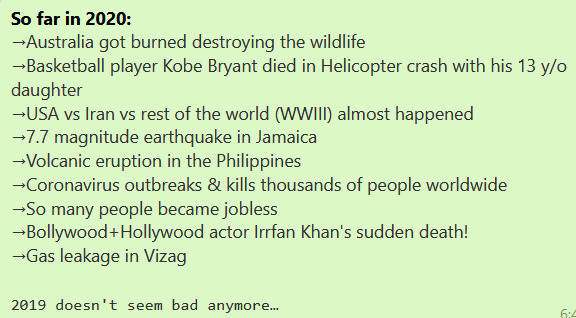