An assistant sub-inspector (ASI) in New Delhi has been arrested and sent to judicial custody for allegedly raping his friend's maid at gunpoint in Northwest Delhi's Rani Bagh area, police said on Saturday. ASI Javeer Singh who was posted at Punjabi Bagh police station in West Delhi, went to his friend's place on Thursday night and allegedly raped his maid (23), under the influence of alcohol. 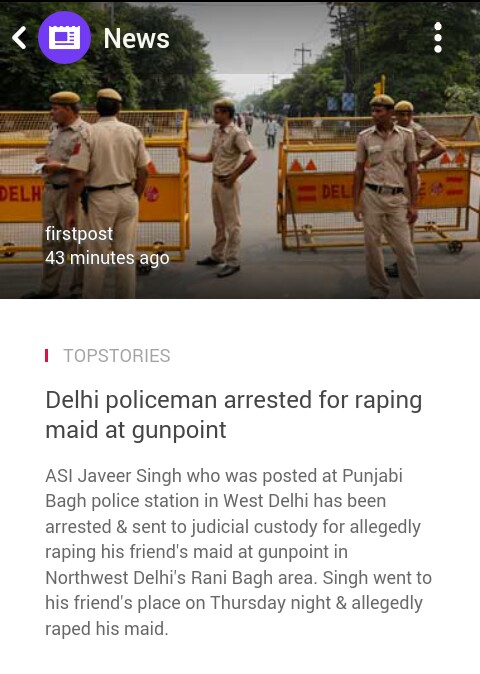 Delhi Police is likely to dismiss the ASI. "He has been arrested and is now in judicial custody. We are also examining his dismissal under Article 311(2)(B) (of Constitution)," Commissioner of Delhi Police B S Bassi said on Saturday.

A CCTV footage has also surfaced which shows Singh was carrying a gun. It is alleged that the rape was committed at gunpoint. The victim had approached police yesterday and an FIR was registered following which the ASI was arrested. The cop was yesterday produced before a court, which remanded him to 14-day judicial custody.

The medical examination of the girl confirmed rape. Bassi, speaking to the media, said, "We will ensure that chargesheet is filed at the earliest and he is convicted. As far as departmental thing is concerned, we are not going to wait for the departmental enquiry. He will be dismissed under Article 311 (2) B where a person is dismissed straightaway."

Yeah, but he just want to let the people know what is happening.
S

all ppl thing india is bad
Click to expand...

From where you got this statistics?
S

I police will do like this, then we can imagine..wht goons will do.. :nj