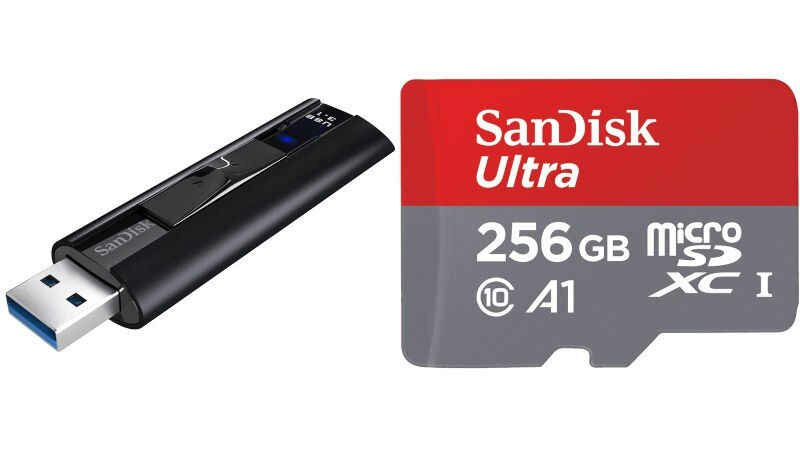 Storage solutions company, Western Digital has announced new storage devices under its SanDisk brand at the ongoing CES this week. The company unveiled a new solid-state USB flash drive called Extreme Pro USB 3.1 that can transfer data at a maximum speed of 420MB/s. SanDisk also introduced a high-speed 256GB SanDisk Ultra microSDXC UHS-I card, which is priced at $199.99 and will be available in the markets this January 2017. The SanDisk Extreme Pro USB 3.1 Solid State Flash Drive costs $179.99 and is expected to ship later this month.
At CES, SanDisk unveiled the 256GB Ultra microSDXC UHS-I card that is claimed to be able to read data at a speed of up to 95MB/s. The SanDisk Ultra microSDXC UHS-I card meets the Application Performance Class 1 (A1) requirements from the latest SD 5.1 specifications laid out by the SC Association. With A1, the SanDisk storage card will be able to manage random read input-output access per second (IOPS) of 1,500 and write IOPS of 500. The company claims that its new data storage card can store up to 24 hours of full-HD video.
The 256GB SanDisk Ultra microSDXC UHS-I card also comes with SanDisk Memory Zone app that lets you view, access, and backup the files on the phone in one location. As a highlighted feature, it can automatically move the files from your phone's internal storage to the memory card to free up space. The new SanDisk microSDXC card is also waterproof, shockproof, temperature-proof, and X-ray proof.
SanDisk also unveiled its new solid-state USB flash storage drive called the SanDisk Extreme Pro USB 3.1 Solid State Flash Drive. The new USB flash drive is claimed to 'deliver the speed, capacity, and reliability of an SSD in the convenient form factor of a small USB flash drive'. Rated to deliver a read speed of up to 420MB/s and write speed up to 380MB/s, the new SanDisk USB drive is also claimed to transfer a full-length 4K movie to the drive in less than 15 seconds. Using the new USB 3.1 connection method, the SanDisk Extreme Pro USB 3.1 drive retains the USB Type-A, which makes it capable of supporting a wider number of USB 2.0 and 3.0 devices, except the new MacBook Pro.

It uses an aluminium casing all around the body to prevent it from handling and climate adversities, and comes with a retractable connector. SanDisk is also making sure that the data stored in it is secure with the SanDisk SecureAccess software using the 128-bit AES encryption. The SanDisk Extreme Pro USB 3.1 Solid State Flash Drive comes with RescuePRO Deluxe data recovery software allowing the easier recovery of files that have been accidentally deleted.
The SanDisk Extreme Pro USB 3.1 comes in two storage variants - the 256GB storage variant costs $179.99 in the US while the price of 128GB has not been provided by the company. The 256GB SanDisk Extreme Pro USB 3.1 flash drive will be available to buy from Amazon and Best Buy in the US, and 300,000 offline retailers as well across the globe.