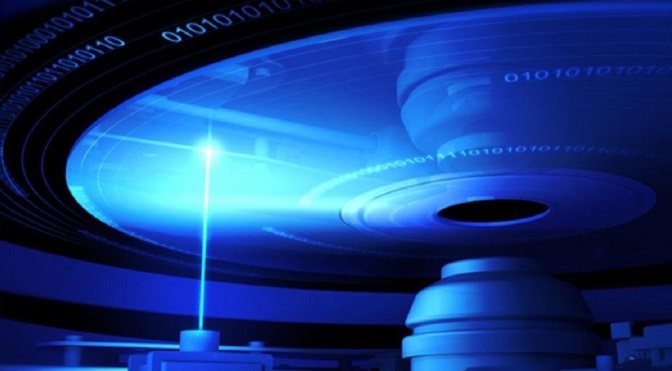 Samsung and Fox have teamed up to launch the world’s first 4K Blu-ray player at IFA today, with support for a number of cutting-edge features and the H.265 / HEVC codec. The new player will offer 10-bit color support, 4K movie playback, and supports both HDMI 2.0a and HDR. Fox appeared on stage with Samsung to launch the show, and Fox Home Entertainment president Mike Dunn told the crowd, “When my colleagues and I at Fox first saw the side-by-side comparison of Ultra HD with High Dynamic Range vs. HD, it was reminiscent of the difference between standard def and high def. This is a massive leap forward for the consumer experience.”
The accuracy of Dunn’s comments, however, are going to depend a great deal on what kind of content you own and the type of TV you display it on. We’ve previously discussed how pixels become indistinguishable depending on how large your screen is and how far you sit from it. If you own a small TV and sit at some distance, upgrading to 4K may not improve your experience. If you have a 65-inch TV six feet away, on the other hand, upgrading is probably worth it.
Resolution, however, is just one variable. HEVC also supports 10-bit color (10-bit support is mandatory for 4K transcoding), and while 10-bit televisions are starting to roll into the market, many manufacturers don’t distinguish between 8-bit and 10-bit support in their own documentation. Sort of identifying the chips used in any given TV, it’s not necessarily possible to determine which output modes it can handle. 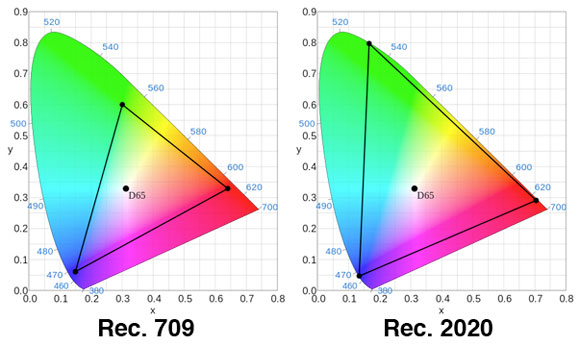 The charts above show the relative color spaces in the old 8-bit and newer 10-bit standards. The differences may not be huge, but there are improvements to moving to 10-bit, and it’s one of the HEVC features that studios are depending on to spur consumers to upgrade. Similarly, the television industry is desperately hoping that the advent of 4K will spur a buying boom not seen since the early days of 720 and 1080p. 3D movies and television were supposed to drive adoption once 1080p became the norm, but that boom never materialized.

The good news for anyone who already bought an expensive 4K television is that an 8-bit panel can still see some benefit from a 10-bit format. Because the colors are still initially sampled from a wider, more accurate palette, the final output on an 8-bit panel can be slightly better than what you’d get from an 8-bit stream.

8-bit on the left, 10-bit HDR on the right. Image by Aguntherphotography

The advent of UHD Blu-ray will be a significant test of the physical content ecosystem. Blu-ray is a profitable format, but it never achieved the same popularity as DVD or VHS, thanks in part to the growth of digital options that obviated the need for an expensive film collection or physical players. At the same time, however, Blu-ray has always offered higher absolute quality than any streaming service, though the exact particulars of that comparison depend on the film, how well it was mastered (or remastered), and the customer’s bandwidth performance.

It’s also unclear if Microsoft or Sony will release new consoles that include support for UHD playback. This will be the first physical format to launch in decades that didn’t have at least one major game console supporting playback. Both the PS2 and PS3 debuted in part as multimedia centers, but the PS4 lacks HDMI 2.0 (required for 60p playback in 4K) and almost certainly lacks any form of dedicated hardware for H.265 decode. While it’s possible that Sony has been hiding such options under its hat, it makes little sense to do so — the company would’ve gotten more marketing traction out of selling the PS4 as “4K Blu-ray ready” from day one.

As with the HDTV transition, there are going to be bumps in the road, poor manufacturer communication, variable film quality, and a great many of moving parts that occasionally fail to interlock. The end result, however, should still be a best-in-class video format that offers a number of advantages over H.264, not just a resolution upgrade.

Among the first batch of movies that will appear on 4K Blu-ray discs are Fantastic Four, X-Men: Days of Future Past, Exodus: Gods and Kings, Kingsman: The Secret Service, and Life of Pi. The player should hit US shores in early 2016 and cost “under $500,” though we don’t have an exact price yet.

A
OTT bundle for Apple TV