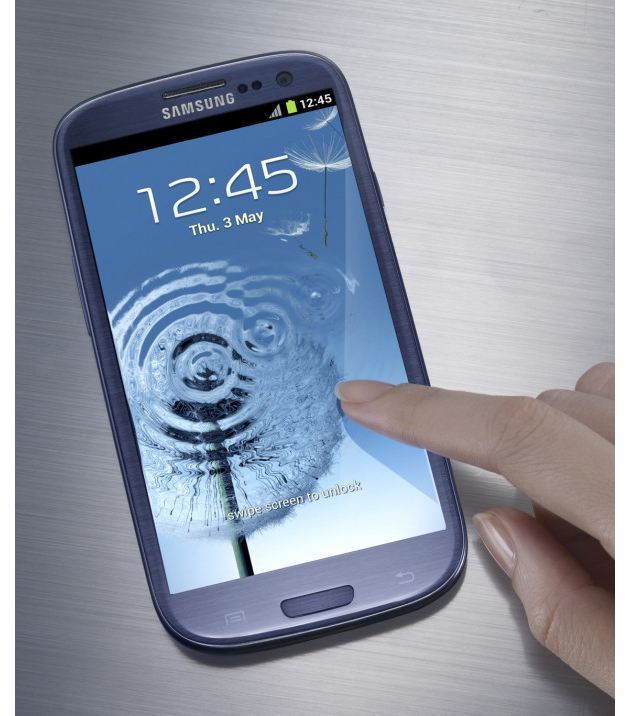 The new SIII will have a 4.8 inch touch screen, 8 megapixel camera and will use the latest version of Google's Android software 4.0 (Ice Cream Sandwich).

The new Galaxy will be powered by Samsung's quad-core microprocessor.

The Exynos 4 Quad, based on British chip designer ARM Holdings Cortex A9 technology, enables more tasks in a shorter period of time - for example streaming video can run on one core while the other cores update applications, connect to the web and scan virus-check, simultaneously.

The smartphone will be launched in the first week of June, just after the May 29 debut in Europe. Coming to another important detail, Galaxy S III will be priced at Rs. 38,000 (MRP), while the street price is expected to be around Rs. 34,000.
The Korean manufacturer has stated that India is in the first list of countries getting their hands on the all new Galaxy S III.
B

thanks for the info @Ravi.. awaiting more updates from you


biswajit.HD said:
thanks for the info @Ravi.. awaiting more updates from you
Click to expand...

biswajit.HD said:
thanks for the info @Ravi.. awaiting more updates from you
Click to expand...

You're welcome...I really want this to be 40k+ only...So it can stop me from buying..If I buy a mobile this year I'm gonna be kicked out of the home (buying a mobile every year from 2009..5800 xpress music,Nokia N900 and Samsung Galaxy S II)
Click to expand...

@Raviteja - i Frankly love the design , it has the understated elegance of an Apple product and that's high praise. But really a moot point for me as i dont really like android !!
S


Samsung has finally unveiled its latest flagship mobile, predictably calling it the Samsung Galaxy S III. Shipping with Android 4.0.4 Ice Cream Sandwich onboard with TouchWiz 4.0 UI, it will be launched first in Europe on May 29, before gradually making its way to other shores globally. For now, no pricing information is available.

The 8.6mm-thick Samsung Galaxy S III packs a 4.8-inch HD Super AMOLED Gorilla Glass display, boasting of a resolution of 1280x720 pixels (roughly 306 ppi), and a 16 million colour gamut. The S III features an 8MP rear autofocus camera with touch focus, geo-tagging, image stabilization, face and smile detection, apart from 1080p HD video recording at 30 fps, a burst-mode of 6fps for up to 20 images, and an LED flash. To round off the optics, it comes with a 1.9MP front-facing camera, capable of 720p HD video recording. Unfortunately, as you’d have guessed with touch-focus, no dedicated camera button is on the device.

The rest of the specifications are no less top-of-the-line, with a 2,100 mAh battery sure to provide some serious juice to power it all. The Samsung Galaxy S III will ship with a choice of 16GB/32GB/64GB built-in storage, and microSD card support up to 64GB. It will also come with 50GB cloud storage, courtesy Dropbox, with a 2-year subscription.

Other photo-related features include: Best Photo mode, which snaps 8 images off in quick succession using the burst-mode, and pre-selects the best, though the user will be able to keep any of the images; Face Zoom, which helps users automatically and quickly zoom into a face in any image, without manually selecting it; Face Slideshow, which will convert a group-photo into a series of face-only images for a quick slideshow view; Group Tag, which automatically places photos into group-based albums; and finally, Social Tag, which overlays contact information and a shortcut over photos of people listed in the phone's contacts.

Other features include a document editor, an image and video editor, active noise cancellation with a dedicated mic, as well as a full-range of sensors – an accelerometer, gyroscope, proximity sensor, digital compass, and a barometer. This also brings us to another new Samsung feature for the Galaxy S III, called SmartStay, which ensures the phone’s display does not timeout when it is being used, using the front-facing camera. In an effort to further distinguish the device from other top-end Android devices from other manufacturers, Samsung has also added features like S Health, exclusive navigation features, as well as a new 17-million track strong Music Hub service with a Scan and Match feature.

Finally, if you wanted to know, the Galaxy S III weighs in a diminutive 133 grams. The Korean giant has also promised a range of exclusive Galaxy S III accessories, such as the S-pebble MP3 player with Music Hub’s scan and match feature, a charging dock, a car dock, a wireless charging kit, an extra battery, a flip phone-cover, an HDMI adapter, and an AllCast wireless dongle for video and photo streaming, similar to HTC’s recently introduced HTC Media Link HD accessory.