Have you ever seen a image of 121 Megapixel resolution. It is a must see Image of Earth taken by the Russian Satellite. Dont miss this exclusive image. 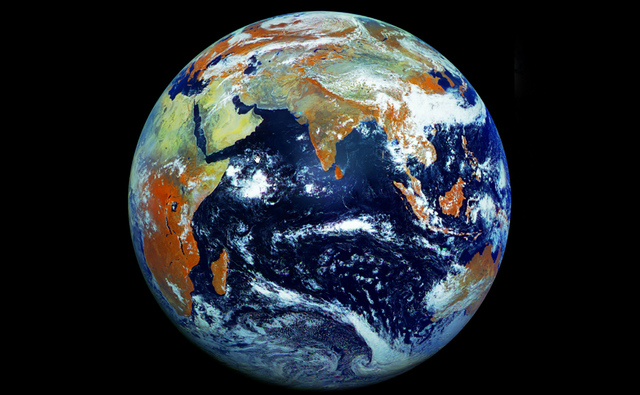 There's been a long history of NASA-provided "Blue Marble" images of Earth, but now we're getting a different perspective thanks to photos taken by the Elektro-L No.1 Russian weather satellite. Unlike NASA's images, this satellite produces 121-megapixel images that capture the Earth in one shot instead of a collection of pictures from multiple flybys stitched together. The result is an image that's the highest-resolution image of Earth yet. The image certainly looks different than what we're used to seeing, and that's because the camera aboard the weather satellite combines data from three visible and one infrared wavelengths of light, a method that turns vegetation into the rust color that dominates the shot.

An educator named James Drake obtained over 350 full-resolution photos from the NTs OMZ (Russian Research Center for Earth Operative Monitoring), and used them to make several videos showcasing a day in the life of Earth. The satellite takes a full image of Earth from its stationary point over 35,000 kilometers above the Indian Ocean every 30 minutes, providing the material for the video below. The images have a resolution of one kilometer per pixel, and the one you see above was taken on May 14, 2011.

Be sure to check a zoomable version of the image here to see the detail for yourself and be reminded of just how tiny we really are.

Awesome snap...thanks a ton for the topic