Meet Mitra: The ‘Made in India’ robot that stole the show at GES Hyderabad 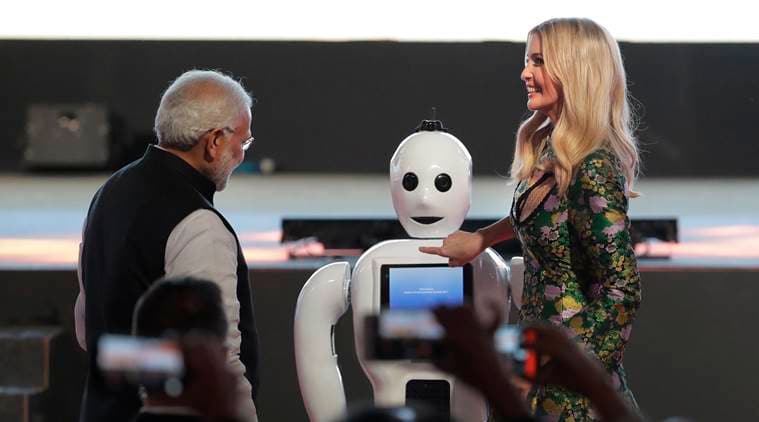 It was in 2015 when a robot made by a team of Invento garnered much appreciation during a maker fair that made the founders realise that a proof of concept may work better to inspire.

The proof of concept can now be found walking in the corridors of Canara Bank and PVR Cinemas in Bengaluru, greeting consumers and telling them what they like best. Capable of face detection, face recognition, speech recognition, contextual support, and autonomous navigation; Mitra is a 5 ft tall humanoid.

Mitra, adds Vishwanathan, can be used as a customer service agent in multiple domains like banks, hospitals, airports, hotels . The startup is currently focussing on two sectors - BFSI and retail sectors.

Six months after getting their first Mitra, Vishwanathan claims Canara Bank is already in the process of getting the robot working for them in 500 of their branches. "The bank has also extended a loan of Rs 80 lakh to us which would enable us to further expand and upgrade our services," adds Vishwanathan.

The founders are currently monetising via two streams - rental and sales. Priced at Rs 8 lakh, the company makes a majority of the revenue from renting out Mitra for corporate (Rs 25000) as well as social events (Rs 15-18000).

"People rent out Mitra for weddings and birthday parties. It moves around like a loud jukebox playing songs, takes pictures, also tweets those out if you want it to," explains Vishwanathan.

Rentals form a majority of the company's revenues at present, but the company is in the midst of overhauling their manufacturing process which is expected to increase the share of sales

Saw this live on TV, felt proud that Indian made Robo is being used