Commencing final arguments in the 2G scam related money laundering case, special public prosecutor Anand Grover alleged that a conspiracy was hatched by Mr. Raja and other accused and Rs. 200 crore was the “proceed of crime.”

He claimed that the amount was transferred to Kalaignar TV through various firms and was returned only when Mr. Raja was called by the CBI for questioning in 2G spectrum scam case. “Kalaignar TV was owned by Kanimozhi (DMK MP) and Dayalu Ammal (wife of M Karunanidhi) who both are related to DMK supremo M Karunanidhi and Raja also belonged to the same party,” Mr. Grover told Special CBI Judge O P Saini.

He further alleged that “the conspiracy was hatched by A. Raja and others, including the companies, for illegally granting telecom licences to ineligible firms.”

Mr. Grover also said that the money was transferred to the TV channel through various companies in a circuitous route.

The arguments on Monday remained inconclusive and would continue on July 27. Mr. Raja, Ms. Kanimozhi, Ms. Dayalu Ammal and 16 others, including nine firms, are facing trial in the case.

The ED on April 25 last year had filed a charge sheet against the accused for alleged offences under the Prevention of Money Laundering Act (PMLA).

The court had on October 31 last year framed charges against the accused saying that Raja, allegedly in connivance with Kanimozhi, Dayalu Ammal and other co-accused, was involved in “parking” of illegal gratification of Rs 200 crore in Kalaignar TV.
W 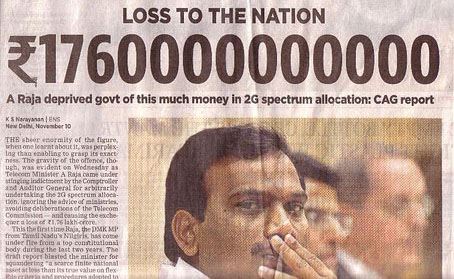