A new Supreme Court appointed panel of administrators, which will supersede the present BCCI office bearers, is expected to take over Indian cricket on Friday.

The apex court is likely to take this watershed decision at the hearing where the Board of Control for Cricket in India (BCCI) is to give a progress report on implementing the Justice R M Lodha Committee’s recommendations.
With the Board rejecting most of Lodha’s suggestions at its special general meeting in Mumbai last week, the court will be left with no option but to clip the wings of BCCI’s high-profile officials, putting a question mark over their future as cricket administrators.

On the eve of judgment day, hoping for a last-minute relief, BCCI president Anurag Thakur wanted one last meeting with the Lodha committee to explain the practical problems in implementing reforms.

“Our members said they want to go back to court and explain their difficulties. Even the BCCI deserves justice, isn’t it?” he told The Indian Express.

But the plea didn’t cut any ice with the judges. Justice Lodha told this paper, “I don’t think anyone outside the court, anyone can change the court’s order.”

Though cricket circles were abuzz with speculation about SC’s impending decision, the writing seems to be on the wall: The BCCI is in for a complete overhaul.

Lodha added that his committee’s recommendations were non-negotiable. “BCCI must understand that initially, the SC formed our committee to suggest reforms, which we complied with after a year-long exercise. When we submitted the report on January 6, 2016, they were merely recommendations. But after that, the court heard the BCCI, who argued the matter and took all sorts of objections. After the elaborate hearing, SC pronounced its verdict and our report was merged with the SC verdict. It got a seal of approval from the SC. One may agree or may not agree but the judgment is binding and it should be respected,” he said.

The BCCI, on its part, has agreed to some recommendations but three major ones — one-state-one-vote, cooling-off period and three-year tenure — have not gone down well the majority of cricket officials. This is because if the three administrative reforms are implemented, almost the entire cricket officialdom would automatically get disqualified.

Lodha acknowledged that the BCCI would see a massive administrative void, but said he isn’t worried that the game would suffer. “It doesn’t happen, there is a huge pool of talent available. Nobody is indispensable. Given a chance, people will prove better. Administration should not be confined to a few people. They may even fail but it will be after they get an opportunity. It is no rocket science,” he said.

The BCCI, meanwhile, said that courts have been unfair to them. “Recently, there was a PIL filed in SC to bring transparency in the judicial system. Was that accepted, what was the outcome? Every organisation needs transparency, was that accepted by SC? They said there has to be a change in the law as per the law of the land. We are also dealing with the law of the land, which is the TN Societies Act. That’s why a three-fourth majority is needed to accept a reform; we can’t force members. If members have any objections, the court must listen or the Lodha committee must look into it,” Thakur said.

SC raps board for disbursing money to states:BCCI vs Lodha panel

The Supreme Court threatened to dismiss the top rung of India’s cricket board on Thursday following allegations of defiance of sweeping reforms recommended by a panel set up to clean up the world’s richest cricket body.

“I think we are forced to come to a situation where the BCCI is asking for their suspension by this court,” said Chief Justice of India TS Thakur.Under one of the many Lodha committee recommendations, the BCCI can only clear past dues but not make plans for the future at its meetings.

SC raps board for disbursing money to states:BCCI vs Lodha panel | Millennium Post
A

Court Room Battle BCCI vs LODHA COMMITTEE
[size=large][size=small]11.20 AM: Boria Majumdar gives a cricketing analogy to the tussle between the BCCI and the Supreme Court-appointed Lodha panel
[/size][/size]
[size=small]The BCCI here is like the Indian cricket team. If a player has been given out by the umpire, he cannot change the decision. Only the umpire can, not the Indian cricket team.[/size]

[size=small]11: 32 AM: As the argument gets underway inside the courtroom, here is a look at the key differences between the Lodha panel and BCCI as listed out by Anusha Soni: [/size]

[size=small]- BCCI had promised to take up a 'new memorandum'. However, it did not keep its promise and instead called a meeting to 'consider' the proposed changes. The apex court directions are binding on the BCCI.[/size]

[size=small]- No directions issued to the State authorities for compliance with SC orders.[/size]

[size=small]- BCCI did not comply with SC directions on selectors and selection process.[/size]

[size=small]- Appointment of officials at the BCCI board - SC barred politicians holding public offices, mandated a cooling off period. BCCI made appointment to the post of Secretary in violation of these norms. [/size]

[size=small]11.37 AM: Information from inside the court -  The Chief Justice of India asks what Ajay Shirke does. What is his line of work? Gopal Subramanium arguing now and pointing out how BCCI has continued to be defiant.[/size]

[size=small]11.40 AM: The CJI has just asked BCCI to respond to India Today's exclusive interview with ICC CEO Dave Richardson , where he had exposed BCCI's last bid effort to resist Lodha reforms [/size]

[size=small]11.43 AM: There's plenty of action inside the Supreme Court at the moment. Here are more live updates:[/size]

[size=small]11.57 AM: More information from inside the Supreme Court: [/size]

[size=small]Chief Justice of India has now asked how Ratnakar Shetty knew about the conversation between Anurag Thakur and Shashank Manohar and what's the basis of his allegation? Serious questions being asked of the BCCI's conduct. [/size]

[size=small]12:04 IST: Lodha Committee points out BCCI's failure to implement the recommendations despite the SC order. Points out that BCCI appointed Katju as the single interface between the committee and the BCCI. But Katju publicly said he will not meet the committee.  "Don't just respect us (SC) in words but also in deeds," [/size]

[size=small]Lodha panel rakes up ICC issue on BCCI's demand to furnish a letter and when they didn't get it, they started accusing Shashank Manohar.[/size]

[size=small] Lodha panel: Seven items were to be implemented by Sept 30 but BCCI nowhere close to accomplishing any one of those. [/size]

[size=small]Responded to mails from the Lodha Committee, submits a detailed mail exchange to SC [/size]

[size=small]12:43 IST : Katju is the only interface of communication, who openly said in a press conference to defy SC orders: Lodha Panel to SC [/size]

[size=small]This is an attack on judiciary and any losing side now won't comply with the Supreme Court order.[/size]

[size=small]Disbursement of funds to the state associations continued without formulation of any policy as mandated by SC.[/size]

[size=small]12.55 PM: Amicus Curiae Subramanium recommends administrators of impeccable integrity must be placed to initiate the reform process. Interim board must be set up to implement Lodha Panel recommendations, he says. [/size]

[size=small]13.10 IST: I think we're coming to a point where they (BCCI top brass) are asking for their suspension by Supreme Court: Chief Justice of India TS Thakur[/size]

[size=small]13.14 IST: Disbursement of Rs 400cr is not routine. Don't give money till a disbursement policy is formed. Ask the committee first before disbursement, Supreme Court tells BCCI [/size]

[size=small]CJI Thakur quips: Everybody here is a cricketer. Even I am the captain of the Supreme Court Judges' cricket team.[/size]

[size=small]MORE SCOOP FROM INDIA TODAY: The lawyer representing the Bihar Cricket Association intervened and said that Thakur had selected himself because he was heading the Himachal Cricket Association. And he did so because that would make him eligible to be North Zone Junior Selection Committee member. [/size]

[size=small]Justice Thakur also asked the Lodha panel counsel on the qualifications that they want in administrators who they wish to take over the BCCI in the interim. [/size]

[size=small]Also, the Court has asked for qualifications of the office-bearers of the BCCI including president Anurag Thakur. Kapil Sibal, appearing for the BCCI, said Thakur is a Member of Parliament and has captained a Ranji team as well. Justice Thakur quips - Even I have captained the Supreme Court judges' team.[/size]

[size=small]The Supreme Court also took up the story that India Today did with Dave Richardson, without naming the organisation . The issue was CAG's appointment that the Lodha Committee had proposed in which Richardson had admitted that a verbal request was made.[/size]

[size=small]14.14 IST:  So, the Supreme Court is understood to have given two options - Either elect new administrators or Lodha panel gives the Indian board more time to "fall in line."[/size]

[size=small]14.49 IST: CJI Thakur furious with the fact that States voted against Lodha reforms. He says those associations should refund the money and no further funds be given if they don't intend to reform[/size]

[size=small]14.58 IST: Supreme Court asked BCCI: Will you give an undertaking to implement Lodha committee reforms unconditionally or will the court have to pass an order?[/size]

[size=small]BCCI lawyer Kapil Siban refused to give an understanding.  [/size]

[size=small] [/size]
[size=large]BCCI refuses to give undertaking that it will comply with Lodha recommendations. Supreme Court to pass order on October 7. [/size]
A

[size=medium]13.32 IST: Word JUST IN - The Supreme Court order will be pronounced after 2 PM. BCCI has refused to give any undertaking to accept the Lodha reforms[/size]

13.35 IST: Will the apex court sack the entire top brass of the BCCI? In its hearing on Thursday, the Supreme Court was furious with state associations that had voted against the Lodha reforms. The Chief Justice of India told BCCI not to give any money to such associations and directed that all money paid to those states should be refunded to the Indian cricket board.

[size=medium]13.45 IST: The Supreme Court is likely to pass only an interim order today and it could be related to fund allocation for state associations . Further arguments could resume on October 17.
[/size]
A

[font=helvetica,]1. One State, One Vote - Have only one full member of the BCCI per state (Currently Maharashtra, Gujarat have multiple). Members without geographical boundaries - Railways, Services and universities to become associate members.[/font]
[font=helvetica,]=> Ratified by Supreme Court. Not Accepted by BCCI in its SGM.[/font]

[font=helvetica,]2. Terms for Office Bearers - Cannot be over 70 years old; cannot hold office for more than 3 terms. No consecutive terms[/font]
[font=helvetica,]=> Ratified by Supreme Court. Not Accepted by BCCI[/font]

[font=helvetica,]3. Board headed by a General body of the BCCI (Apex Council) with separate governing bodies for BCCI administration and the IPL to report to it[/font]
[font=helvetica,]=> Ratified by Supreme Court. Accepted by BCCI[/font]

[font=helvetica,]4. BCCI administration to be done like any professional organization - Headed by a Chief Executive Officer (CEO), who will be assisted by six professional managers to take care of the day-to-day management[/font]

[font=helvetica,]5. Limited autonomy for the IPL Governing Council - Representation of players (A players' association) and franchises in the IPL GC which will report to the General Body => Later Withdrawn by the Lodha committee[/font]

[font=helvetica,]6. Three special officers - An ombudsman, an electoral and an ethics officer => Ratified by Supreme Court, Accepted by BCCI[/font]

[font=helvetica,]7. No Politicians or government servants as office bearers. No additional votes for Presidents. Vice Presidents pruned from five to one[/font]

[font=helvetica,]8. Selection, Coaching and Performance management to be managed by former international cricketers with knowledge on the topic[/font]

14.37 IST: So it's confirmed. The Supreme Court will resume hearing arguments on October 17.

14.00 IST: According to sources, the Lodha committee will object to further arguments in the matter
A 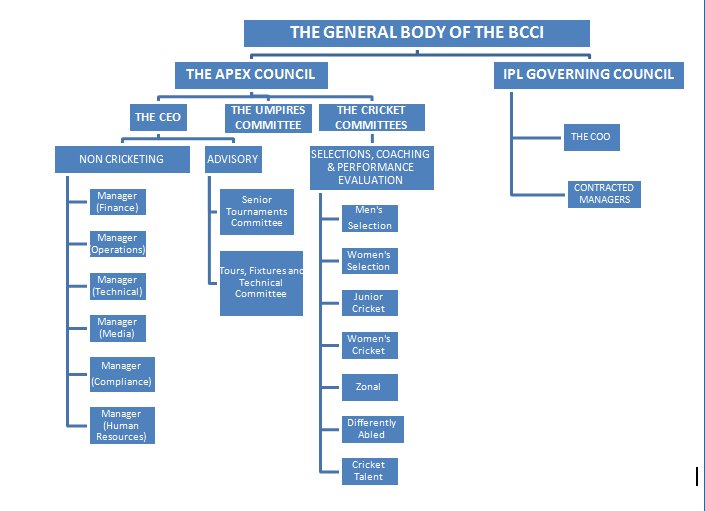 [font=Arial, sans-serif]This is the structure of the BCCI as recommended by the Lodha Committee[/font]