Journey from LCD to AMOLED: The Evolution of Displays

1. LCD
A liquid crystal display, or LCD, is the technology behind most monitors today. It relies on electrodes and polarizing filters enabling specific pixels to pass the light from a backlight source to the screen. Each pixel has 3 color sites and each of the sites has a color filter for red, green, or blue. This is the RGB matrix you’ve probably heard of and allows the plethora of colors on current devices. LCD screens are generally categorized as using an active matrix variety (newer ones) or a passive matrix (cheaper, in older phones).

2. Passive matrix LCD
Passive matrix screens were the first to appear on mobile phones and are now mostly seen on low-cost devices. Basically, this is a type of LCD color displays that did the job for the time, but is now being replaced as it appears to have lower response times and washed out colors. In passive-matrix LCDs there are no switching devices, so each of the pixels is addressed for not just one frame but more. This makes for the lower response time and also doesn't allow high contrast ratios. 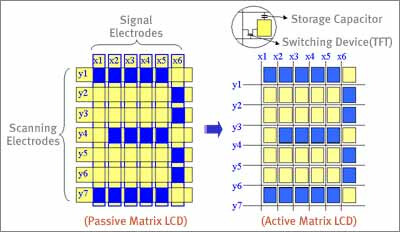 The most common passive matrix technology is Color Super-Twisted Nematic, or CSTN. Such screens suffer from issues like ghosting, which is basically when a quick change in images occurs and the last image is still visible as a ghost on top of the current one. Contrast and color depth are also far below the current standard. 4. TFT LCD
Thin film transistor, or TFT, is probably the most common type of active matrix displays. The thin film of transistors works with the electrodes and gives each pixel a transistor. Then, each row is connected and it can receive voltage so that subpixels change to make up a particular color. Images on such displays are refreshed row by row, but so quickly your eye and brain blend it into a single picture, so you don't notice the change. TFT LCD displays also share the bright contrast and strong color saturation of active displays. 5. In-Plane Switching (IPS) LCD
IPS LCD displays were out before Apple released the iPad, but it was the iPad that put the term in wider circulation. IPS is a technology that gives wider viewing angles and better color reproduction. It’s still an LCD manufacturing at its core, but the perceived quality is better with IPS. Currently, most of those quality displays are believed to be manufactured by LG. 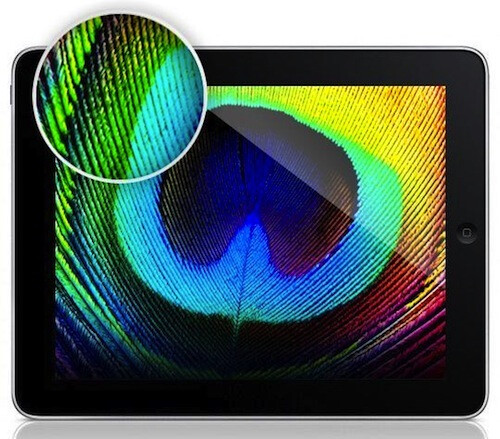 6. Super LCD (S-LCD)
If you’ve recently held an HTC phone, chances are you’ve seen a Super LCD display. The difference between S-LCD and regular liquid crystal displays is in the space between the display itself and the glass that covers it. This not only makes the overall display unit thinner, but also reduces glare outdoors and makes interactions seem more natural and with the display itself rather than a piece of glass on top of it. S-LCD screens also have improved power consumption, and - interestingly - while used by HTC are actually manufactured by Sony.

All of the features of a Super LCD screen are refined in Super LCD 2, the current successor technology. 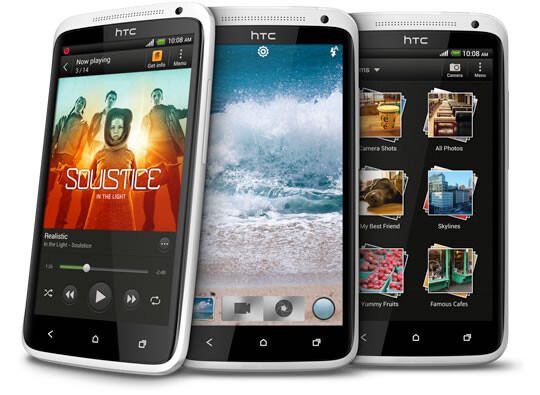 7. OLED
If everything so far was LCD, OLED is a radically new type of displays. Most agree that it’s the future. Here’s why. Unlike LCD displays that rely on a backlight that passes through color filters, OLED screens use organic materials making their own light. That’s where their name comes from - organic light emitting diodes (OLED).

8. AMOLED
AMOLED stands for active matrix (AM) and organic light emitting diodes (OLED). If you’ve paid attention until now, you’d know that this means we have a mixture of technologies in AMOLED screens. They use the active matrix from TFT LCDs and combine this with the organic elements. The active matrix requires a thin-film transistor backplane to switch the pixels on and off. This is done to remove the ghosting effect seen on first OLED screens.

AMOLED displays retain the fantastic contrast of OLED screens and their power efficiency. 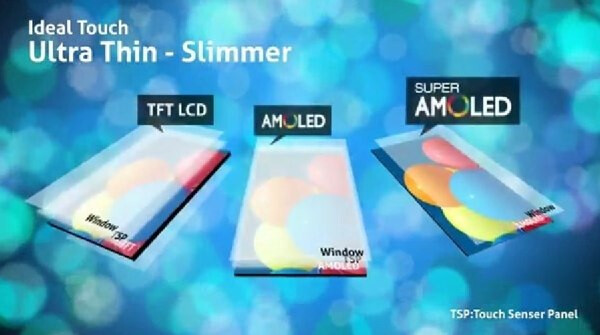 9. Super AMOLED
Super AMOLED is a step towards thinner displays, reflecting less light and hence performing better outdoors. The capacitive touchscreen is built right into the display rather than being overlayed on top. This is what allows the thinner overall panels. 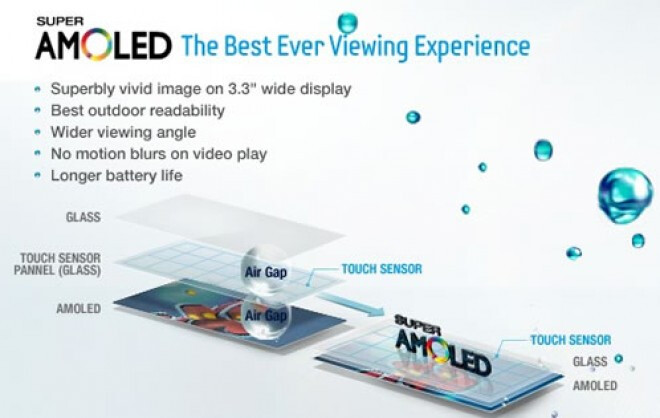 10. Super AMOLED Plus, Advanced, HD
Super AMOLED forks into several different but similar categories from here on. Super AMOLED Plus is the kind of display introduced by the Samsung Galaxy S II where the standard RGB pixel arrangement is used instead of the sub-par PenTile matrix.

Super AMOLED Advanced is a term coined by Motorola that stands for a brighter S-AMOLED screens with higher (but non-HD) resolution.

Finally, HD Super AMOLED displays are all those where the resolution goes above 720x1280 pixels.