Google to launch display glasses in 2012 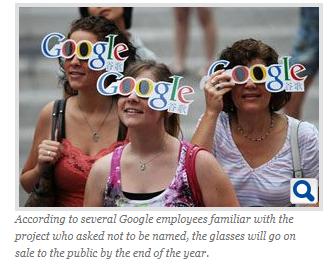 People who constantly reach into a pocket to check a smartphone for bits of information will soon have another option: a pair of Google-made glasses that will be able to stream information to the wearer's eyeballs in real time.

According to several Google employees familiar with the project who asked not to be named, the glasses will go on sale to the public by the end of the year. These people said they are expected "to cost around the price of current smartphones," or $250 to $600.

The people familiar with the Google glasses said they would be Android-based, and will include a small screen that will sit a few inches from someone's eye. They will also have a 3G or 4G data connection and a number of sensors including motion and GPS.

A Google spokesman declined to comment on the project.

Seth Weintraub, a blogger for 9 to 5 Google, who first wrote about the glasses project in December, and then discovered more information about them this month, also said the glasses would be Android-based and cited a source that described their look as that of a pair of Oakley Thumps.

They will also have a unique navigation system. "The navigation system currently used is a head tilting to scroll and click," Weintraub wrote this month. "We are told it is very quick to learn and once the user is adept at navigation, it becomes second nature and almost indistinguishable to outside users."

The glasses will have a low-resolution built-in camera that will be able to monitor the world in real time and overlay information about locations, surrounding buildings and friends who might be nearby, according to the Google employees. The glasses are not designed to be worn constantly - although Google expects some of the nerdiest users will wear them a lot - but will be more like smartphones, used when needed.

Internally, the Google X team has been actively discussing the privacy implications of the glasses and the company wants to ensure that people know if they are being recorded by someone wearing a pair of glasses with a built-in camera. The project is currently being built in the Google X offices, a secretive laboratory near Google's main campus that is charged with working on robots, space elevators and dozens of other futuristic projects.

One of the key people involved with the glasses is Steve Lee, a Google engineer and creator of the Google mapping software, Latitude. As a result of Lee's involvement, location information will be paramount in the first version released to the public, several people who have seen the glasses said.

haha...i dont understand why people will pay $600 for these stupid looking glasses...