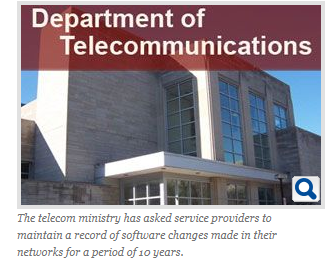 NEW DELHI: Further tightening security norms, the telecom ministry has asked service providers to maintain a record of software changes made in their networks for a period of 10 years.

"All the licencees should maintain the record, of what software changes/updation were made and why were these necessitated besides who made the changes and when changes were made, for a period of 10 years," DoT said in a recent directive to telecom operators.

This comes under the amended security clause in licence of telecom operators that were made in May last year.

DoT in the amendment has asked telecom operators to keep a record of all the software updations and changes.

In an other development on telecom security, DoT issued order to telecom operators to stop supporting and providing service satellite phones service through their network.

"All the Access Services Licensees are instructed to immediately discontinue all mutual agreements with the foreign companies, if any, in so far as agreements involve any possibility of the use of satellite mobile phones in India" the order said.

Intelligence Bureau has informed DoT that some of the service providers are providing service to satellite phone user based on their agreement with foreign companies.

However, use of satellite phones by civilians is not permitted in India.
Click to expand...