NEW DELHI: India cannot afford to lower its guard against the global ransomware attack as the world has not seen the last of the virus yet, the head of the country’s cybersecurity agency warned.

The threat is far from over because smartphones could be the next target for the cyber-attackers, Bahl said. The WannaCry ransomware has since Friday infected hundreds of thousands of desktops and laptops running on the Windows operating system.

“The larger operating system is on the mobile, which is Android. We don’t know what will happen if that gets hit. That will be a different ballgame altogether,” Bahl said, adding that CERT-In is preparing for that eventuality.

“Hackers will always be two steps ahead. We do not know what is going to come next and whether this is the end of this particular (attack) or if there will be a variant of it coming.” 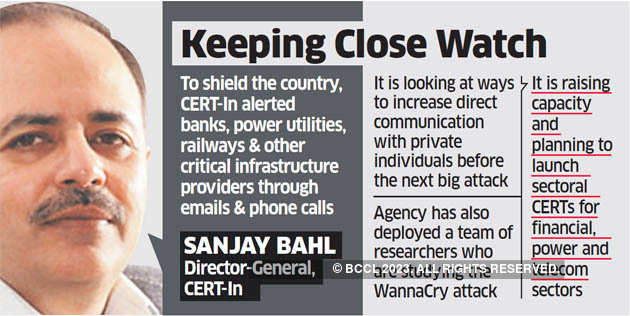 According to official sources, as many as 30 computer systems were found to be affected by the virus. “However, all these systems belong to the administration wing of TTD and were attended to by the engineers of the IT department immediately,” TTD official spokesman T Ravi told Hindustan Times.

Meanwhile, there were reports that at least 20 computer systems in Andhra Pradesh secretariat in Amaravati were affected by ransomware attack. Blocks 4 and 5, mostly in the Revenue department, were hit by the virus on Wednesday.

However, the IT department staff swung into action and managed to save the data from crashing. They could retrieve the lost data and re-write the CDs to clear the virus. Wherever necessary new hard disks would be installed, sources said.

If God cannot prevent cyber attack who else can?

Sarkar said:
If God cannot prevent cyber attack who else can?
Click to expand...

There is no other power bigger than God's power