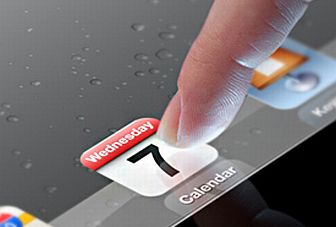 Apple on Wednesday unveiled updated versions of iLife and iWork for the new iPad, as well as iPhoto for iPad.

A feature known as Photo Journals uses iCloud to display photos. You can flag high-quality photos and tap to bring up these flagged photos. Share buttons let you send the photos to email, Twitter, or Facebook.

An auto enhance option improves the quality of pictures, while a crop tool automatically finds the horizon line in landscape photos and auto-straightens the horizon. The crop tool also lets you rotate via multitouch, while the exposure tool lets you adjust shadows, highlights, brightness, and contrast.

Apple's iPhoto is priced at $4.99 and is available today in the App Store.

The revamped iWork includes new 3D charts and animations, new builds, and transitions, Apple said during a press event in San Francisco. Keynote, Numbers, and Pages all now take advantage of the Retina Display that was added to the new iPad, scheduled to hit stores on March 16.

All three are still $9.99; existing owners can get a free update, starting today.

With the iLife update, meanwhile, GarageBand adds smart strings, a note editor, iCloud access, and sharing. There's also a new feature known as jam session, which will allow iOS devices running GarageBand to play together and create a new song.

The revamp is available as a free update to existing users and it's $4.99 for new users. GarageBand was unveiled for iPhone and iPod touch back in November.

The new iMovie includes an interface for creating a movie trailer. Create a fake movie studio name and visual storyboard to help you pick out parts of video, Apple's Phil Schiller said. It is also available for $4.99 or as a free update.